Stanisław Przybyszewski once described St. Jacob as a panther getting ready to jump. Well – that’s quite an accurate association. It’s the only one among all Toruń churches that – despite being made of brick, the building material normally used in this area – presents itself just as light as stone cathedrals in the south of Europe. Its openwork patterns, style and dignity have fascinated people up to this day. What remains a mystery is: how could a parish church of the New Town, being rather a poorer cousin of the Hanseatic Old-Town empire, take features of the most distinguished courtly architecture? St. Jacob’s is a building that any European capital city would be proud of. That’s why it is assumed that the church might have performed the function of a castle temple for the local Teutonic convent. There are many more mysteries and ambiguities connected with the building. On the one hand, it is the only one among monumental Toruń churches that casts no doubts about the time when it was constructed. On the other – it’s the one which hides more secrets than any other! But first things first.

The presbytery is surrounded by an ornamental, colorful inscriptive frieze. It informs who, when and for what purpose had funded the building. It says that the church was erected (or rather its construction commenced) in 1309. But what about the pastoral needs of the New Town community during the decades prior to its foundation? As the New Town has existed since the year of 1264!

What clearly stands out from the red church building is a whitewashed north vestibule. There are a few assumptions that shall explain this aesthetic procedure. What seems most convincing is a thesis about a special function of the outbuilding. Namely – just like in the case of the Old Town – the parish church was one of the most significant buildings, both in a social and political sense. Vestibule constituted a kind of “extension” of the town hall. It was here – at the border of everyday life profanum and sacrum-immersed mystery – where the dispositions of the Splendid City Council were read out. If we take a closer look, there is an interesting detail that will draw our attention. On the wall there’s a fantastic creature painted – a demon shaped like a giant hornet. Standing at the border between the two worlds, it prevented from dark forces that had no access to the new-town parish church interior.

In the wall going around the entire church complex there is a mysterious little building – a Gothic object as big as a newsagent’s shop. It’s an old mortuary, called ossuarium. In the past, when the town was growing big and the cemetery next to the church was small, mortal remains of Torunian people were taken out from the ground so as to make room for the new volunteers. In order to have their bones wait for eternity in peace and respect, they were kept in ossuarium.

What arises the biggest interest out of all the objects in the church are the works of art brought from the Dominican church in the thirtieth years of the 19th century, namely – the depiction of passion and two crucifixes. Toruń’s Passion of Christ is a first-league picture related with Hans Memling’s workshop. Simultaneous presentation shows the history of Christ from his entry to Jerusalem up till the Resurrection. One of the scenes includes an intriguing detail: Judas’ body hanging from a tree branch after his successful suicide attempt. From his chest there comes a demonic ghost, as black as coal. The diabolic figure must have aroused extreme emotions among religious Torunians because it has been scratched with a sharp chisel, as if someone wanted to remove it from the Work of Redemption. The figure of Christ spread on a cross in the form of the Tree of Life is another piece of art taken from the Dominican St. Nicolaus’ Church to St. Jacob’s. This image has grown into Torunians’ awareness so much that its replica decorated the Pope’s altar during John Paul II’s visit to Toruń.

The third, probably the most interesting piece, is the so-called “black” crucifix. Its name seems no longer adequate as the figure of Jesus has been “whitened” during its last conservation, which lets Toruń city guides jokingly compare him to Michael Jackson. However, it doesn’t change the fact that this depiction is definitely a unique one. The image is said to have a miraculous power that was to be felt mainly by rafters coming to Toruń. The crucifix was brought from Florence. It is one of two objects of this type in Poland. The figure of Christ induces one to sympathize. He’s sculpted as a naked man with his hips covered with perizoma made of real cloth. His aching forehead is covered with natural-hair wig put on the sculpture’s head.

The new-town parish church could also take pride in its bell, impressive both with regard to size and weight. The over 6-ton-heavy instrument, once stolen by the Swedes, today rings in the tower of Uppsala Cathedral. It is called Thornan (Thorunian), and because Swedish people are famous for their particular sense of humour, it has been given an inscription saying: with God’s help, brought from Toruń… 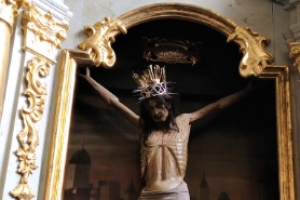 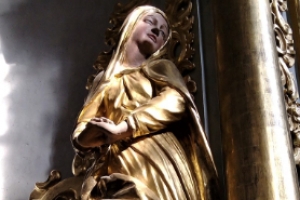 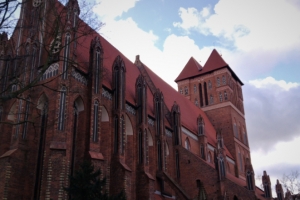 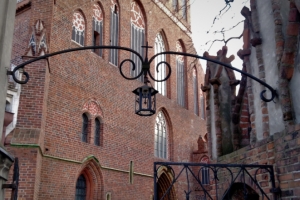 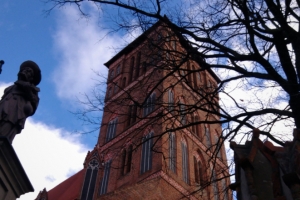